Home » Rev. Pamela Ngunjiri to Advance the Vision for Truth and Reparations

Rev. Pamela Ngunjiri to Advance the Vision for Truth and Reparations 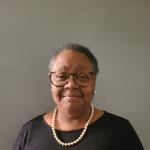 Minneapolis, MN – Minnesota Council of Churches is proud to announce the hiring of Rev. Pamela Ngunjiri as Co-Director of Racial Justice, fulfilling another step of our Vision for Truth and Reparations. Says CEO Rev. Dr. Curtiss Paul DeYoung, “Rev. Ngunjiri’s deep networks developed over years of organizing in Minnesota’s African-American communities and her commitment to the Vision will shape a more just Minnesota.”

Rev. Ngunjiri is a pastor in the African Methodist Episcopal denomination, has been a social worker, college professor, and is recently completing a Doctorate in Ministry focused on Racism, White Supremacy and the Christian Church. With eight years of experience pastoring historically Black Churches and decades of involvement in racially, culturally and ethnically diverse communities Rev. Ngunjiri will be able to hit the ground running and immediately move the Vision for Truth and Reparations forward.

“My education and experience, coupled with my passion for working for racial justice, will benefit not just the Minnesota Council of Churches but also individual congregations throughout Minnesota and their communities,” says Rev. Ngunjiri. Her first day in the position will be April 26.

The Vision for Dismantling the Structures and Repairing the Damage of Racism in Minnesota was announced in a press conference in October of 2020 and has been reported on by the Star Tribune, Chicago Tribune, Associated Press, BBC, CNN, Washington Post and other outlets. The vision includes Truth and Reconciliation commissions; Diversity, Equity and Inclusion trainings in congregations; and reparations to BIPOC communities for the harm done by white supremacy in Minnesota Learn more here.

About Minnesota Council of Churches